X
This site uses cookies to provide and improve your shopping experience. If you want to benefit from this improved service, please opt-in. Cookies Page.
Accept Cookies
Klarna - Now Available
OVER 2,200 TRUSTPILOT 5 STAR REVIEWS
UP TO 48 MONTHS INTEREST FREE CREDIT

Over the years, we have been involved in sponsoring & contributing to various charities for fantastic causes and we wanted to become part of something great. Here are just a few in which we would like to highlight.

After years working in the private business sector, successful Scottish entrepreneur John Weir & his wife, Barbara along with their son & daughter have set up The Weir Family Foundation. The Weir Family are determined to give something back to a number of worthwhile charitable causes in Scotland. We were delighted to be involved with the Weir Family Foundation's inaugural Event at the Grand Central Hotel on 1st November 2013. We donated exclusive 'Mr Harold & Son Golden Tickets' offering shopping spree's in store. We look forward to continuing our relationship with the Foundation whilst helping a number of worthwhile charities.

Cancer Research UK is the world’s leading charity dedicated to beating cancer through research. Race for Life is the largest women-only fundraising event in the UK in conjunction with this organisation. A couple of years ago, one of our diamond specialists took part in the woman's Race for Life 10k raising a considerable amount of money for a great cause - Cancer Research. This race was important to her family members who suffered this terrible illness and she felt she wanted to both highlight the importance of funding excellent organisations such as Cancer Research. To this day, we still continue to support this cause by contributing regularly.

Canine Partners trains assistance dogs for people with disabilities in Scotland to enable them to enjoy greater independence and better quality of life. They support people with varying complex disabilities such as Multiple Sclerosis, Cerebral Palsy, Muscular Dystrophy, Stroke, Rheumatoid Arthritis, Spinal injuries and many more. Their dogs are carefully matched to the applicant's needs and lifestyle, no matter how challenging and are trained to help with everyday tasks such as opening and closing doors, unloading and loading the washing machine, picking up dropped items, pressing buttons and switches and getting help in an emergency. We donated generously in 2013 to help this great charity. A spokesperson had this to say about our sponsorship: "We are incredibly appreciative of the support given by Mr Harold & Son, who have helped us to transform the lives of more people with disabilities with our amazing dogs."

Aberlour Child Care Trust is the largest, soley Scottish, Children's charity and giving children the best possible start in life is at the heart of everything they do. Each year, across Scotland, Aberlour helps over 6,000 of the most vulnerable and disadvantaged children, young people and their families to cope with major obstacles such as disability, exclusion, parental drug and alcohol dependency and family Breakdown. Here is a word from Aberlour themselves: "Our aim is to improve the lives of Scotland’s children and young people, and with your help to make sure that every child can be kept safe and fulfil their potential.  To find out more about the work of Aberlour in your area, please visit www.aberlour.org.uk. We were proud to sponsor this fantastic charity in June. There was a brilliant day out at Gleneagles full of golf, a black tie dinner and a raffle which included a Mr Harold & Son Golden Ticket which was donated towards this great cause.

The Weir Family Foundation held their annual Gala Ball at the Grand Central Hotel on 7th March 2015.  The main beneficiary of this event was Age Scotland which is the largest charity in Scotland dedicated to enabling everyone to make the most of later life. Age Scotland’s ambition is to inspire people to see that they can change theirs and others’ later life for the better; engage with people and enable them to change later life for the better; and support older people who are struggling as they live longer to achieve better, happier and healthier lives. Mr Harold & Son were delighted to support such a deserving and worthwhile cause by donating an exclusive "Mr Harold & Son Golden Tickets' offering shopping spree's in store. We look forward to continuing our relationship with the Weir Family Foundation whilst helping a number of worthwhile charities.

Cystinosis Foundation UK are hugely thankful to all contributors to the success of The Great Big Glitter Ball held at the Prestonfield on 7th March 2015. This event was organised by a group of friends of the family of 5 year old Morven, who has cystinosis. Morven, like all other people with cystinosis, takes multiple medications throughout the day and night to combat the damage done by this very rare inherited metabolic disease. Cystinosis Foundation UK aims to support the families of those with cystinosis, raise awareness of the condition and fund research into making the treatments of this chronic illness more effective. Mr Harold & Son were delighted to support such a deserving and worthwhile cause by donating the Great Big Raffle prize of a £1000 voucher to spend in their shop. 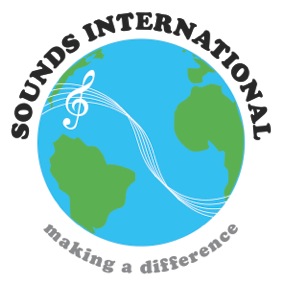 Sounds International is a community singing group made up of around 100 like-minded people of all ages and walks of life, who share a common joy in singing. We are proud to help out this fantastic group who contribute so much to the community. Founded in 2003 by professional vocal coach, Eddie Binnie, Sounds International has grown in size and stature over the years and won widespread respect and recognition for its ethos of promoting a closer understanding between people of all beliefs, nationalities and cultures through the unifying effect of music. This aim qualified the group for sponsorship from the Millennium Fund under ‘Sense over Sectarianism’ and Sounds International was granted charitable status in 2006. Singing on your own is good…but nothing compares to the sheer delight of singing with others in four-part harmony. Better still, there are no formal auditions, nor is it essential to be able to read music. But singing isn’t only about the social aspect of people coming together to make music; it also has proven health benefits. All the worries and stresses of everyday life are replaced with feel-good endorphin's to create a natural ‘high’ that is clearly visible on members’ faces at the end of a rehearsal or a concert performance – the latter freely undertaken throughout the year to help raise funds for community groups and charities, particularly those that do not receive statutory funding. To date, the group have raised over £75,000 for charity which is fantastic. We are confident they will continue with their great work.

The Scottish Association for Children with Heart Disorders are a fantastic charity offering support to families and grown up congenital patients. They are available by phone to give practical advice, visit families in hospital when needed and organise family fun days. They also raise funds to purchase equipment not forthcoming through normal NHS channels. They were the chosen charity at the Weir Family Foundation Black Tie Gala Ball, held at the Radisson Blu in Glasgow on 25th March raising over £22,000. We sponsored this worthwhile fundraising event with a £3,000 Golden Ticket to spend in store. This raised over £3,000 alone for the Gala Ball. The Weir Family Foundation has a general theme flowing through their chosen beneficiaries focusing primarily on health - the most important thing in our lives. This is followed closely by charities associated with children and also with age. We wish the Scottish Association for Children with Heart Disorders well in all their efforts to help those in need.

Glasgow-based firm, Just Employment Law has aided the fight against Pancreatic Cancer by raising over £81,000 at its Summer Ball held at the Radisson Blu Hotel in Glasgow on Saturday 15 June. The Ball, the second such event following on from the success of JEL’s first one held in 2017, welcomed almost 500 guests on 15 June 2019 and was co-hosted by Des Clarke and Tam Cowan. Guests at the event were wined, dined and entertained by pianist John Rankin, solo vocalist, Amy Lawrence and their band, Seattle throughout the evening. Just Employment Law were delighted to be supported by Mr Harold & Son again, by their very kind donation of a golden ticket for the event!

For JEL’s Managing Director, David McRae, the event marked 3 years since the passing of his mother, Margaret in June 2016. It was around that time that David, when researching his mother’s condition, learned about Pancreatic Cancer in all its forms and about the charity, Pancreatic Cancer Scotland.  A growing charity with a small team of dedicated and passionate individuals, PCS are committed to raising awareness, improving education, healthcare and research, with a mission to ensure that individuals and families affected by pancreatic cancer and associated tumours have access to support, information and care. For further information about PCS please visit their website; www.pancanscot.org